The Rs 100,000 crore organised Indian dairy industry is something that global dairy giants such as Fonterra or Danone are finding impossible to ignore. The irony, however, is that these dairy companies have struggled to get their recipe right in India. Danone (dairy arm) burnt its fingers and exited the Indian market in early 2018, while Fonterra, which had partnered with Britannia exited the country in 2007.

But the 1.3 billion strong consumption story never really allowed them to give up on India. Within a year of its exit, Danone’s investment arm, Danone Manifesto Ventures, pumped in Rs 182 crore into gourmet yoghurt brand, Epigamia, while New Zealand’s Fonterra Dairy, after a 12-year hiatus is back in India through a 50:50 joint venture with Future Consumer Products. 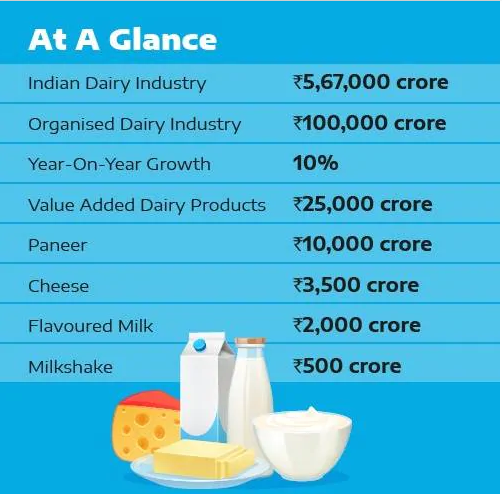 “Earlier, when we got into the country, the focus was on fresh liquid milk. There were challenges in procuring the right quantity of milk as well as the right quality of milk. The second part was the cold chain, which was fairly traditional and not developed to handle the cold chain requirements across the country. We faced issues and realised that we needed to exit. Those challenges which were there at that time have gone away to a very large extent,” points out Sunil Sethi, Chairman, Fonterra-Future Dairy and MD, Sri Lanka & India Subcontinent, Fonterra. The JV’s target is to build a Rs 6,000 business in the next 5-6 years.

While Fonterra is the newest entrant, the last few years have also seen the entry of Lactalis, one of the biggest dairy entities in the world. The other foreign player, testing Indian waters is The Bel Group, which makes the famous The Laughing Cow cheese. Though Bel has been present in the country through the import route, the company last year set up its Indian subsidiary. “Cheese has been riding on the wave of Indian cuisine and food habits. The time is ripe now for this category to accelerate further,” says Amaljit Singh Sekhon, Country Head, Country Head, Fromageries Bel India.

Rahul Kumar, CEO of Lactalis India in an earlier interview with Business Today, had said that the French dairy major’s goal was to become a $1 billion company. “In terms of size, taking into account our organic and inorganic growth, Lactalis India is about a Rs 4,000 crore company in India. Today, given our geographical reach, the spread of markets and plants, we are very close to being the number one private company.  Our aim is to become a $1 billion company in the next five years in India with 70 per cent of total output being liquid milk and the balance 30 per cent as value-added products.”

While the common thread among all these global dairy companies is their aspiration to make it big in India, their strategies are varied. While Danone is happily playing the role of an investor, Lactalis is pretty much toeing the lines of the traditional dairy cooperatives like Amul and Nandhini, which get the bulk of their revenue by selling liquid milk. “Milk is the starting point. Efficient procurement along with building the brand equity is crucial as the success in all the products thereafter are linked to how this has been handled. When you sell a milk pouch, it is not a pouch but brand equity that is entering a home and it is first with milk that you have to build trust with the lady of the house,” says Kumar of Lactalis.

In order to have a large enough play in liquid milk, it is essential to procure milk. However, it took the likes of Amul over 70 years to build their milk procurement network of 1.3 million farmers, therefore, Lactalis chose the path of acquisitions. It entered India in 2014 with the acquisition of Chennai-based Tirumala Dairy and then went on to acquire Indore-based Anik Dairy and more recently it acquired Prabhat Dairy in Maharashtra.

“To optimise your cost and to become competitive in the market you have to procure large quantities of milk to make value-added products costing competitive in the market. To do this, you should have a very efficient procurement system near to your plant and whatever market share you are targeting, you should have a greater share than that on the procurement side. Also, full control over the procurement process also means a better grip on product quality and consistency. We procure it totally ourselves and do not buy it from the third party. I have always maintained that dairy business is a procurement business and not a selling business,” explains Kumar of Lactalis.

Fonterra-Future Dairy has opted for the value-added products route and doesn’t plan to be present in liquid milk at all. Value-added dairy products is a Rs 25,000 crore market and is set to outpace liquid milk sales by 2021. “Urban lifestyle and pressure on time are changing the way liquid milk is being consumed. Around 45 per cent of the organised dairy market consumes pouch milk, and that market is moving towards UHT. Many years ago, mothers wanted their children to drink milk because it is nutritious. Today, the mothers want their kids to have some kind of dairy, but it need not be milk, it could be cheese, milkshake or yoghurt. That gives us enough scale to build it. We are not in a hurry, we are in this game for eternity. We have got right the partnership needed to win and we will evolve,” explains Sethi of Fonterra.

Ashni Biyani, MD of Future Consumer Products (Fonterra’s JV partner), says, “We are sure to make the category more convenient than what it currently is. For us, dairy will not necessarily be restricted to something drinkable, it could even be something to munch.”

But isn’t it important for a dairy company to have its own procurement of milk and also have a presence in liquid milk to achieve scale? Biyani believes that in an era when Indian consumers are opting to even buy curd in a packaged form, there is definitely room for a new-age dairy company which is not over-dependent on liquid milk. “Margin is where we are focused and it can’t be delivered in pouch milk,” she says.

In fact, neither Fonterra nor Fromageries Bel is investing in setting up their own milk procurement system. They have chosen the co-packing model by partnering with Schreiber Dynamix.

Sethi of Fonterra says that having one’s procurement is important only if one is in the business of liquid milk.

While value-added products offer higher margins compared to the low single digits of liquid milk and, hence, is an attractive proposition for all dairy companies, the global ones are trying hard to differentiate by claiming to offer higher levels of nutrition.

“We are the only fortified cheese brand in India, our packs have the power of vitamin, mineral and protein. While we might be the country that produces the largest amount of milk, there is still a calcium deficiency,” points out Singh of Fromageries Bel.

Danone India’s strategy of being a 100 per cent value-added dairy products company didn’t work. After all, 70 per cent dairy consumption in India comes from liquid milk, and one wonders whether a value-added only strategy will work for these global players. In fact, Lactalis, which hopes to get 30 per cent of its revenue from value-added products, is focusing only on Indian value-added dairy products such as curd, paneer and ghee. “We acquired the largely ghee-making company, Indore-based Anik Industries. Then, paneer is there in almost every diet in India. In fact, the market for paneer (cottage cheese) will be several times more than that for cheese.  So, there is a market for value-added products in India but we have to identify, which value-added product will work. We have invested in a paneer plant and a ghee plant along with the focus on liquid milk,” explains Singh of Lactalis.

While the dairy cooperative story is a largely regional (GCMMF in Gujarat, Nandhini in Karnataka and Sudha in Bihar), the last few years have seen the emergence of a lot of regional brands such as Milk Mantra (Odisha), Milky Mist (Tamil Nadu) and Sarda Farms (Maharashtra). These regional dairy brands have done far better than the national players. While dairy processing factories need to be closer to the procurement centres, the food habits of people vary from state to state and brands which cater to the local taste buds always have an advantage. One of the reasons for the failure of Danone apart from its focus on a single product (yoghurt), was its strategy of painting a diverse country like India, which has diverse food tastes, with a single brush. The biggest lesson for its global peers in India has been to have a region focused strategy.

Lactalis India entered India by acquiring Tirumala, which is a regional brand out of Tamil Nadu. It then went on to acquire Anik, which is popular in Central India and then Prabhat Dairy in Maharashtra. “Lactalis has over 250 brands but it never kills the local brand,” explains Kumar.

The Fonterra-Future JV has national aspirations, however, they are clear that their strategy will not be one-size-fits-all. “Whatever is right for New Zealand may not be right for India. We are clear that we will keep the Indian consumer at the heart of everything,” points out Sethi of Fonterra. The JV first plans to roll out its products in the West and then move to the South. “We are looking at a national rollout but we are not in a hurry. The idea is to first have credible co-packaging partners across regions,” Sethi adds.

Will the global dairy giants be able to taste success in India? Will they be able to challenge the dairy cooperatives? Let’s wait and watch.