New Delhi: Amid a largely flagging economy and stagnating exports, India saw significant growth in the exports of milk and milk products in the last financial year.

Skimmed milk powder, casein products, butter, ghee, cheese, cream and curd are the several kinds of milk products that are exported by India. Among these, skimmed milk powder saw the largest growth at 292 per cent. 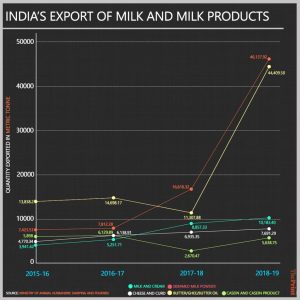 According to senior officials in the ministry, the increase has come in the wake of the incentives offered by the Narendra Modi government under the Merchandise Exports from India Scheme (MEIS) scheme last year.

“The incentive was initially given up to 10 per cent which was further revised to 20 per cent,” said an official who did not wish to be named.

The scheme, launched by the Ministry of Industry and Commerce in 2016, is meant to promote export of notified goods manufactured in India. The incentives provided by the government under this make the exporters competitive in the international market. Rewards under MEIS are payable as a percentage of realised FOB (free on board) value of covered exports, by way of duty credit scrip under the scheme.

R.S. Sodhi, managing director at milk cooperative Amul, said, “This initiative of the Government of India which comes under the ambit of foreign trade policy scheme has imparted an immense boost to Indian dairy exports. However, we are still trying to diversify this increase in export in other products such as cheese and curd.”

Tarun Sridhar, former secretary, animal husbandry, dairying and fisheries, said there is nothing to celebrate about this growth as areas remain in dairy exports that need improvement.

“The export of value-added products like cheese needs to be increased along with an increase in quality as most of India’s exported products are for diaspora, like ‘lassi’, but other products still don’t meet global standards,” said Sridhar.

He also said India is a very vast market in itself, which is a major hindrance in the growth of exports.

A spokesperson for milk cooperative Mother Dairy agreed, saying most of the company’s products are consumed within the domestic market itself.

India is the world’s biggest dairy industry in terms of milk production, according to the Agricultural & Processed Food Products Export Development Authority website. Last year, India produced close to 146.31 MT of milk, 50 per cent more than the US and three times as much as China.

Uttar Pradesh, Maharashtra and Punjab are major dairy-producing states in the country.