VADODARA/RAJKOT — Soon, Gujaratis can say with elan — we moved your Feta cheese! Welcome to new epicurean trends in Gujarat, the cradle of India’s White Revolution, where goats are being ‘milked’ for dairy products beyond the globally expensive milk powder. 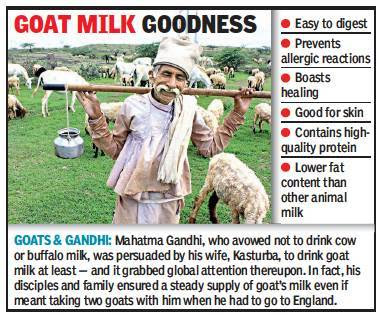 And moving the feta — a soft, brined white cheese global delicacy made from goat and sheep milk — Gujarat will give you many alternatives including goat milk Greek yoghurt, a first-of-its-kind value-added product prepared from goat milk! It will be launched at a national seminar on Saturday aimed to mainstream the pastoral systems of Saurashtra.

There’s more. A Rajkot-based private player is set to launch ‘shrikhand’ and ‘lassi’ too made from goat milk to tickle the taste buds. Not to be left behind in exploiting goat milk’s potential, home grown dairy giant Amul too is exploring the market potential with products like cheese and ‘peda’.

Nationally, private players like Rajasthan’s Aadvik Foods, Delhi’s Courtyard Farms, Nutragoat, Farm Fresh and others have already started selling frozen goat milk, said to be the closest to mother’s milk, in the range of Rs 400 a litre, milk powder at Rs 1,200 and goat-milk soaps for Rs 150 a piece!

Board of the Surendranagar District Cooperative Milk Producers Union Ltd (SDCMPUL), a member union of the Gujarat Co-operative Milk Marketing Federation (GCMMF), has given approval to start procuring goat milk from breeders in three talukas of Surendranagar — Sayla, Chotila and Dhrangadhra

A pilot project of SDCMPUL, popularly known as Sursagar Dairy, has revealed that it can procure around 4,000 litres milk per day from here. It has also moved a proposal seeking grant of Rs 1.5 crore under the Rashtriya Krishi Vikas Yojna from the animal husbandry department to develop a separate collection system for goat milk.

“GCMMF is mulling to market goat milk like it did for camel milk. The proposal will come up in next board meeting. Surendranagar is known for Jhalawadi breed of goats,” said Sursagar Dairy’s chairman Bababhai Bharvad.

The project is expected to benefit 8,000 nomadic families – who own goats and sheep. “We fully support the initiative of Sursagar Dairy,” said Valamji Humbal, GCMMF’s vice chairman.

“As of now ‘maldharis’ sell goat milk to tea vendors and others for Rs 15 to Rs 20 per litre. Through the value-added products like yoghurt and fresh cheese, we expect them to earn around Rs 40 per litre,” said Manoj Mishra, executive director of Kutch-based NGO Sahjeevan.

“We will begin commercial production of goat milk Greek yogurt with a target of 10,000 cups a month,” said Jay Kishan, proprietor of United India Dairy Products, which wants to dish out goat milk ‘shrikhand’ and ‘lassi’ as well.